The most sacred part of the ancient Egyptian temples were the innermost sanctuaries. This is where the oracle statues of the god’s were hidden in shrines until needed. The oracle statues were carried by priests on sacred boats during festival days. These statues were magical as they carried the essence of the god. The statues were oracles, advising primarily the kings and priests, but also taken out into the public on special occasions to bless the common people.

There is an ancient Egyptian sandstone stele (stone tablet) with hieroglyphic text relating the story of a cure performed by Khonsu – the falcon-headed moon god – through one of his oracle statues during the reign of Ramses II. This tablet is called the Bentresh Stele or Bakhtan Stele and it has been dated to almost 1,000 years after the magical events took place.

Some believe the purpose of the stele might have been to reminisce about Egypt’s Middle Kingdom era or to glorify Khonsu-Neferhotep, “the merciful” and Khonsu-Pairsekher, “the provider”, the two aspects of the main god worshiped in Thebes. The story may have been inspired by the rivalry of their respective priesthoods. However, it does provide insights into the worship of the golden oracle statues, the gods, and the literature of the ancient Egyptians.

According to the stele:

When Ramses II was visiting Nahrin (Mitanni), royal princes of every foreign land came bowing in peace to the might of his majesty. Their gifts of gold, silver, lapis lazuli, turquoise, and every kind of plant of the woodlands were brought before him, and each prince tried to outdo the others. The prince of Bakhtan (Bactria) also sent his gifts and had included his beautiful eldest daughter as a gift to his majesty. The princess pleased the heart of his majesty greatly and so she was established as Great Royal Wife Nefrure. (Ramses II actually had married a Hittite princess who was given the Egyptian name Maatnefrure.)

Sometime later the royal couple were in Thebes and a messenger from the prince of Bakhtan arrived. “I have come to you, O King, my lord, on account of Bentresh, the younger sister of Queen Nefrure. An illness has seized her body. May your majesty send a learned man to see her!” His majesty said, “Bring me the the priests and council of the House of Life.”They were ushered in to him immediately. His majesty said: “You have been summoned in order to hear this matter: bring me one who is most wise among you.” Then Thothemheb, the royal scribe and doctor, came before his majesty, and his majesty ordered him to proceed to Bakhtan with the messenger.

The learned man reached Bakhtan and he found Bentresh to be possessed by a spirit; he found the spirit to be an enemy however there could be a way to fight it. Then the prince of Bakhtan sent again to his majesty, saying:  “O King, my lord, may your majesty send a god to fight against this spirit!” His majesty went to the golden oracle statue of Khonsu-Neferhotep, asking his assistance for the princess Bakhtan. His majesty spoke to Khonsu-Neferhotep: “My good lord, if you turn your face to Khonsu-the-Provider, the great god who expels disease demons, he shall be dispatched to Bakhtan.” There was movement on the part of the god’s oracle statue signifying approval. His majesty said: “Give your magical protection to him, and I shall dispatch him to Bakhtan to save the daughter of the prince of Bakhtan.” There was further movement by the statue of Khonsu-Neferhotep as he made magical protection for the oracle statue of Khonsu-the-Provider. His majesty then sent Khonsu-the-Provider on the great bark with five boats and a chariot, and many horses from east and west.

When the oracle statue arrived in Bakhtan it was brought to Bentresh. He made magical protection for the princess and she became well instantly. Then the spirit who had been within the princess said to Khonsu-the-Provider: “Welcome in peace, great god who expels disease demons! Bakhtan is your home, its people are your servants, I am your servant! I shall go to the place from which I came, so as to set your heart at rest about that which you came for. May your majesty command to make a feast day with me and the prince of Bakhtan!”  Then the god motioned approval to his priest, saying: “Let the prince of Bakhtan make a great offering before this spirit.” 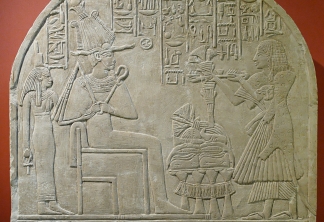 However, the prince saw how powerful the god was and wanted to make the god stay in Bakhtan. So the god spent almost four years in Bakhtan until one night as the prince of Bakhtan slept, he dreamed he saw the god come out of his shrine as a falcon of gold and fly up to the sky toward Egypt. The prince awoke in terror and said to the priest of Khonsu-the-Provider: “The god is still here with us! He shall go to Thebes!” Then the prince of Bakhtan let the god proceed to Egypt, having given him many gifts of every good thing and very many soldiers and horses.

They arrived in peace in Thebes. Khonsu-the-Provider went to the temple of Khonsu-Neferhotep. He gave the gifts of every good thing from the prince of Bakhtan to Khonsu-Neferhotep, his superior, and did not keep anything for his own temple.

And thus the god’s oracle statue expelled a spirit and cured the princess.