The distinction between songs, hymns and poetry in Ancient Egyptian temples, tombs, and papyrus texts is not always clear. The term “song” is used for the writings which are depicted with musical instruments and if the songs are seen to have a clear connection with temples and festivals then they are usually described as hymns. 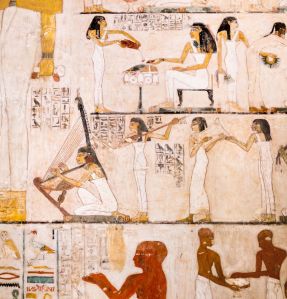 Other songs sung at funeral feasts and inscribed on monuments were depicted with harps and called “The Harper’s Songs.” The image on these texts had a blind harper singing the composition to the deceased and sometimes the family of the departed.  Since the songs are reflections on death, rather than being part of the rituals associated with burial, there is freer expression of the thoughts of the writer/scribe. The actual origin of Harper Songs is uncertain, but they provide an interesting insight into the attitude of the Ancient Egyptians toward the balance of life and death. The following is one of several Harper Songs with the theme being the sorrow associated with death and advice to enjoy the life of the present.

The Harpist for Osiris, Chief of the Crew in the place of Truth, Inherkhawy, who says:

Here is this man, this worthy one,
who lives redeemed by abundance of good
tendered by God indeed
All who come into being as flesh pass on,
and have since God walked the earth;
and young blood mounts to their places.
The busy fluttering souls and bright transfigured spirits
who people the world below
and those who shine in the stars with Orion,
They built their mansions, they built their tombs
and all men rest in the grave.
So set your home well in the sacred land
that your good name last because of it;
Care for your works in the realm under God
that your seat in the West be splendid
The waters flow north, the wind blows south,
and each man goes to his hour.
So, seize the day! Hold holiday!
Be unwearied, unceasing, alive,
you and your own true love;
Let not your heart be troubled
during your sojourn on earth,
but seize the day as it passes!
Put incense and sweet oil upon you,
garlanded flowers at your breast,
While the lady alive in your heart forever
delights as she sits beside you.
Grieve not your heart, whatever comes;
let sweet music play before you;
Recall not the evil, loathsome to God,
but have joy, joy, joy, and pleasure!
O upright man, man just and true,
patient and kind, content with your lot,
rejoicing, not speaking evil
Let your heart be drunk on the gift of Day
until that day comes when you are beyond.

~ In the tomb of Inherkhawy, at the royal cemetery of Thebes during the New Kingdom 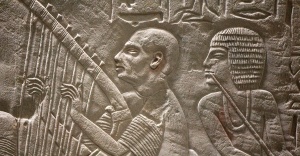 Here is a newly supercharged with vibrational transference and Reiki Energy Crystal Blessing Kit! This kit includes the natural crystals and stones shown in the pictures: Quartz Crystal – Clear quartz helps to elevate your consciousness and bring clarity into your life. It is clear light, cleansing and purifying energy fields.