The Ancient Egyptians practiced divination for two main purposes: to inquire about the present and obtain useful information to make changes to a situation; or to beg for assistance from a god to make desired changes to current circumstances. It was the magician who attempted to compel the God(s) to do his or her will.

Ancient Egyptians revered cats because they felt that the cat (or the image of the cat) would protect them from all kinds of black magic and evil, both natural and supernatural. Amulets and charms containing images of cats were used in rituals, rites, and ceremonies. Specific breeds of cats were in the ancient Egyptian temples including the Mau and Burmese, as well as black cats which were considered to be the most powerful and the most sacred. The Goddess Bast is depicted as a black cat. The Egyptian temple cats were believed to significantly help during acts of divination.

The primary methods used in Egyptian divination were trance; mediumship; fire, water, and oil scrying; dream and dream interpretation; and oracles. The following is an outline of the preparations needed to be done by a magician once a divination was planned.

First, prepare the body. It is stated in the magical papyri that the magician must be pure for three days and specifies celibacy and “purity from every abomination.”

Locate a secret place to perform the divination, this should be a dark, clean enclosure. It was preferred that the enclosure face east or south. Gather all required divination tools. Commonly, the tools were natron-water to purify the location, a new ceramic lamp without red color (a vessel or bowl can be used instead of the lamp), a clean linen wick, lamp oil or kerosene, vegetable oil to pour in the vessel or bowl, frankincense, natural ink to write magical symbols or words of power on the linen wick, and eye-paint/powder to place into the eyes to assist in seeing invoked deities (use with caution!).

Magicians usually practiced divination in secret, at night or at dawn. It was thought that at these times the psychic currents were strongest. The instructions continue: place the eye-paint into the eyes when ready to begin the lamp-divination. Invoke a specific God/Goddess, or say a spell over the lamp. If the magician used eye-paint, he/she will see the God standing behind the lamp. Depending upon the divination purpose and script (prepared by temple scribes) repeat the spells seven or nine times. If an answer is not forthcoming, threaten that the God’s lamp will not be lit, and will be filled with fat instead of oil. 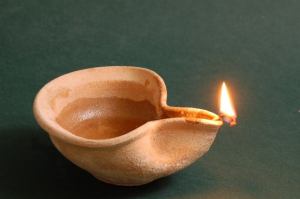 The script is recited seven or more times so that the conscious mind can concentrate on the work at hand. A trance state is induced. For this reason, it is very important that the magician follow the script specifications to obtain the best results. Depending upon the script, a God may or may not be invoked. One reason for a God not to be summoned is that the God Sobek dwelled in the liquid oil of the lamp and was already present.

Any number of Gods and/or Goddesses may be invoked. The Leyden Papyrus uses the word “compeller” to refer to the invoked God who compels the (other) Gods to do the magician’s will. Some of the Gods/Goddesses usually invoked included Anubis, The Opener of the Ways, Thoth, Chief Over the Mysteries, Shai, a god of Destiny, Khonsu or Hathor for Moon divination. Any deity to whom one feels attuned with can be invoked. While it seems true that Egyptian scribes recorded and tested excellent scripts to be used “as is” without alteration, a magician may achieve the best beginning results by working with Gods and Goddesses that appeals to him/her.