From the beginning of the First Dynasty of Egypt (circa 3200 BCE) the great cheetah goddess Mafdet was worshiped. She was known as “the runner” representing swift death. As the “Avenger of the King” Mafdet was believed to rip out the hearts of evildoers and lay the hearts at the Pharaoh’s feet in the same manner a cat delivers her catch to her owners. She was the Great Fetterer who lives in the Mansion of Life (Pyramid Text utterance 384) and was the embodiment of judicial power.

Her other known titles include “Lady of the House of Life,” “Slayer of Serpents” and the “Great Cat.” Information on the worship of Mafdet is scarce while other feline goddesses Bastet and Sekhmet, in the form of a lioness who protects the pharaoh, likely assimilated her functions. However, Mafdet’s reverence and existence is evident, especially to the pharaohs, as her images can be found on the pharaohs’ personal items and in the beds where they were mummified.

There are numerous Pyramid Text Spells pitting Mafdet against hostile underworld snakes. She is frequently associated with the “House of Life” (Per Ankh) and “Mansion of Life.” The House of Life is the part of a temple associated with education, medicine and scribes. However, the “Mansion of Life” may refer to the royal palace, and the spells reflect the concept of having Mafdet in the form of a cheetah or other feline kept for the purpose of protection and hunting venomous snakes in the living rooms of the royal palace.

PT utterance 295 has Mafdet leaping at the neck of an underworld snake. In utterance 297, Mafdet’s claws strike the face of an attacker and 298 says it is the knife in her hands which will decapitate the threatening serpent; in 385 she attacks the snake with her bare hands and in 390 she steps on it. The many hostile snakes in the Pyramid Texts eventually become Apophis of the Book of the Dead, against whom Mafdet prevails in Book of the Dead spells 39 and 149.

Mafdet was the protector of Re (Ra) decapitating the sun god’s enemies with her razor sharp teeth, as well as destroying snakes and scorpions.

Re arises, his uraeus upon him, against this snake which came forth from the earth and which is under my fingers. He will cut off your (i.e. the snake’s) head with this knife which is in the hand of Mafdet who dwells in the Mansion of Life. PT Utterance 298

In mortuary temples in the Theban Necropolis cheetahs were often depicted with collars and leashes suggesting a place within the royal household. Despite their hunting skills, cheetahs were never considered man-eaters and when reared from cubs they displayed strong protective instincts. Due to this trait, it was believed that guardian cheetahs carried away the spirits of the pharaohs when they died. The spotted design on the coat of this sacred guardian may have reminded our ancestors of the stars. 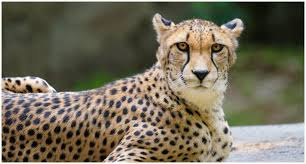