We host and care for a variety of wildlife, wild creatures, as well as domesticated ones at all of our Sanctuaries. It is our intention to live in peace and harmony with all living things – however all living things don’t necessarily have the same instincts. Wild creatures are called “wild” for a reason. Predators naturally wish to follow their instincts, as do scavengers, carnivores, and the like.

Recently, as those of you who have been following my writings know, we had some tragedies at the hands of wild creatures who were following their instincts for food in a very vicious manner.  Raccoons were basically creating a mess and causing havoc in our peaceful Sanctuary.  When raccoons communicate, their calls and sounds, a kind of “trilling”, are quite distinctive. Almost every sundown we would hear their sounds and be prepared to shoo them away as nicely as possible given the hard feelings we have towards raccoons.

Over the last couple of weeks we have heard the trilling of the raccoons but never saw them. They seemed to be staying in the woods away from our Sanctuary. However, the twittering sound started getting closer…and closer in the last few days. I went running through the Sanctuary looking for the source of the sounds and to gently shoo the raccoons away. I came to where the sounds were quite loud and not moving. It was somewhat puzzling but since raccoons do climb trees, I looked upward to see which tree a raccoon may be hiding in.

I was quite surprised to find the most adorable little creature staring at me and making “raccoon sounds.”  It turns out that Western Screech Owls don’t screech, and why they were named that, Goddess knows? So we have the most delightful guest, or perhaps resident, in one of the large oak trees. Every evening “Screech” makes his presence known and this is truly a blessing for the Sanctuary. Western Screech Owls are ferocious predators and are known to chase away animals bigger than they are.

So the raccoons seem to be gone, and Screech is here, a coincidence?

Blessed be the balance of Nature!

Also I’m thankful to Mother Nature, our Sanctuaries, for providing a bounty of wonderful lavender and rosemary to create  Iseum Sanctuary Lavender Rosemary Crystal Smudges (available on Etsy and eBay). 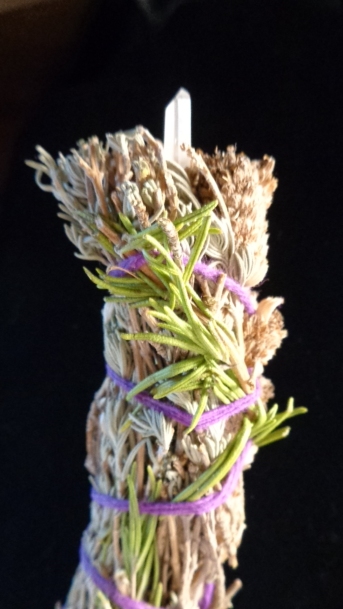